On April 5, 1977, a group of roughly 150 disability rights activists took over the fourth floor of a federal building in San Francisco for 25 days. They would not leave, they said, until President Jimmy Carter's administration agreed to implement a four-year-old law, Section 504, protecting the rights of people with disabilities.

Section 504 of the Rehabilitation Act of 1973 helped pave the way for the ADA. Under the law, no program receiving federal funds could discriminate against people with disabilities. But the law was never properly put into effect. Officials in Richard Nixon and Gerald Ford’s administrations developed but never implemented a set of regulations for the law.

The choice to hold a sit-in as opposed to other tactics had symbolic significance. Sit-ins were used effectively with the 1960s civil rights movement. More importantly, a sit-in upended popular notions of people with disabilities as weak, incapable of asserting themselves, or as objects of pity.

The day-to-day experience of a month-long sit-in would be grueling for any group, but it posed challenges for the Section 504 demonstrators. Some of the San Francisco activists truly risked their lives. The demonstrators received support from outside groups, such as the Black Panther Party, which provided them with food throughout the sit-in. But many went without the care of attendants, or back-up ventilators, catheters, or other necessary equipment.

On April 28, 1977, Section 504 regulations were signed into law. While the disability rights community would have to wait until the 1990 Americans with Disabilities Act for more robust protections against discrimination, Section 504 was a significant victory.

Roberts, a UC Berkeley student, and post-polio quadriplegic living in a hospital was denied the right to make many of the basic decisions college students took for granted. So, Ed with the help of federal funding, started the first Center for Independent Living (CIL). The Center focused on assisting people with disabilities with support to live in the community and not in institutions. This started a national movement.

In 1978, the Federal Rehabilitation Act was amended to provide federal funding for the development of a national independent living network. This network presented a new model of community living for persons with disabilities.

Through peer support, advocacy, skills training and many more services Independent Living Centers across the country now provide services to people with disabilities.

The philosophy of independent living Movement is focused on the belief that persons with disabilities have the same civil rights as other citizens and are the best experts on their supports and needs and must be at the forefront of advocacy.

In 1999, the Supreme Court’s Olmstead Decision supported this philosophy, and today there are over 400 Independent Living Centers throughout the United States practicing cross-disability philosophy and belief of people with disabilities sharing a common thread tying them together.

It is important to understand Independent Living Centers are not places to live, rather they are agencies which provide information, support, advocacy, and skills training to support people with disabilities to live in the communities of their choice.

A special event for families of students with special needs will be held tomorrow (Tuesday, November 29th) at Fort Miller Middle School. The fun will start at 5:30 p.m. with dinner, childcare, sharing of updates and information, and the gathering your thoughts and ideas. Translation in Spanish, Hmong, and ASL.

Each participant will receive one adult ticket and one child admission ticket to the Chaffee Zoo plus a ticket for giraffe feeding.

This is a Community Idea Exchange event hosted by the Fresno Unified School District.

Fort Miller Middle School is located at 1302 E. Dakota Avenue in Fresno. For information and to RSVP, contact Ngia Lee at ngia.lee@fresnounified.org 559-457-3934.

THE FATHER OF THE INDEPENDENT LIVING MOVEMENT

Ed Roberts was an American activist fought for people with disabilities to have the right to fully participate in society.

On December 15th, 2010 the United States House of Representatives declared January 23rd as Ed Roberts Day in honor of the amazing accomplishments he made for the disabled community.  It is because of individuals like him persons with disabilities are able to have the rights and resources they have today. Due to his courage and inspiration, we continue to strive and create inclusivity.

Roberts was paralyzed from the neck down after contracting polio at a young age. His condition required him to use a wheelchair for the remainder of his life.

graduate high school and receive his diploma despite not being able to complete the driver's education and physical requirements.

Roberts won the petition and received his diploma in 1960, then went on to become the first student with severe disabilities to attend the University of California, Berkeley. He received his Bachelor's and Master's Degree in Political Science.

Roberts later returned to lead the Berkeley Center for Independent Living, a project he stated during his time as a student. The program became a model for disability rights around the globe.

Despite his passing in 1995, Roberts is still remembered for the work he did and the change he created for the disability community. RICV honors Ed Roberts. Because of his dedication to making a difference for individuals with disabilities, we have a more accessible world. 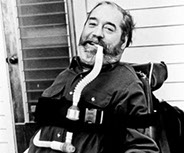